House cleaning is like stringing beads with no knot at the end of the thread.

"Usually the Lord gives us the overall objectives to be accomplished and some guidelines to follow, but he expects us to work out most of the details and methods." -Ezra Taft Benson-

Keeping busy, not on purpose

So I started this quilt back in December. My first intention was to use it for a wedding gift for my son, but as I was making it, it was my wedding colors. So I changed my mind on day 3.

I had these very pretty batiks that were navy blue and teal. I also had a few jelly rolls of batiks that I wanted to use. I had decided on the carpenters star, which I thought was only going to be about 24 inches square. 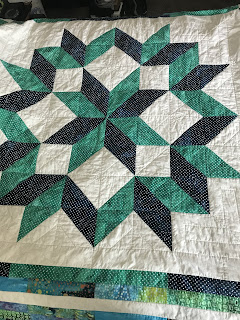 NOPE, it turned out to be about 54 inches!
CRAZY. So much for my star quilt having multiple stars on it. So I decided to put borders on the carpenter star and put stars in the corners.
I had to decided on which stars to use. 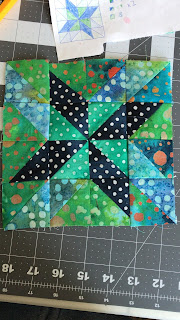 I decided to also tie the stars in by using the same fabric from the carpenter star as the main part of the star in my corners. It's busy, but still pops.  I love the little splashes of yellow and orange that the other batiks brought to the quilt.


I was not sure what to do about the squares being so small.  So I decided to add some sashing. 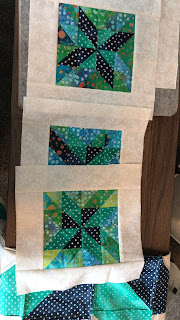 Which I actually liked much better. Then I added borders and it makes it look like the stars are on top of the border frame, which gave it some great character. 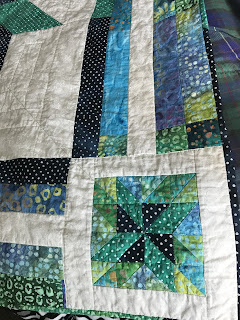 The quilt came out square, and I was hoping to make it queen size. But it is more like a queen topper which is fine because it is beautiful.

This quilt my hubby is calling my quarantine quilt. But I reminded him I started it way before that started.

TM Frugal Gourmet
I am married to the most amazing man. We have been blessed with several children. We are working on getting gardening going and our yard put in.